next door's cats gambol
on our patio, climb up
on to window sills
the dog watches them, her nose
twitching in indignation

5.30 a.m.
we are beseiged by barking
our bitch in season

Sailing on the Dee
we talked of former lovers,
shared new memories;
in rooms not far from the Zoo
animal passions cried out. 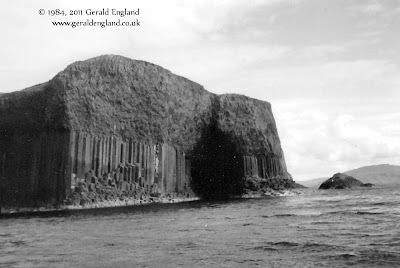 Unpublished
Posted by Gerald (SK14) at 16:00 No comments: Links to this post

crossing the Dateline
Monday is monday again;
no two days alike
when initiation rites
are performed on new seamen

up Ingleborough
snow gathers in the gullies;
at the Cave Rescue
strong tea is brewed, awaiting
the inevitable call. 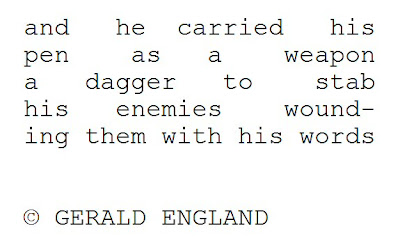 What of All Gebs

WHAT OF ALL GEBS

e by fuchreumbaxle by fame nab ?
holi'old all ape yet whip ye fool scisiavi -
- a be me what fetch hex e whet -
hush e all gabs a face

Email ThisBlogThis!Share to TwitterShare to FacebookShare to Pinterest
Labels: 1991, Gee Cross, Graffiti off the Asylum Walls

sunday-morning sex
lasts only as long as the
children's video


*****
German translation by Hans Christian Meiser - text not to hand.

above the crowd behind walls within my mind beneath the dove

Email ThisBlogThis!Share to TwitterShare to FacebookShare to Pinterest
Labels: 1991, Art of Haiku, Newcastle upon Tyne

Past giant rhubarb and bluebell banks
the path stepstones the stream

Beyond the pebble-strewn beach
the cave penetrates the cliff

From ledges of sea-thrift
water drips over the entrance

Up the multi-creviced rock
a spider climbs

Over in Whithorn they exhume his age
and parade it for the paying public.

I can't stop now
the whips are at my back
I can't stop now
the time's not there to rest and look
The dog is barking, the baby cries,
the postman is knocking at the door
I can't stop now
the milk is boiling over
Though butter clogs in my arteries
I'll keep on trying
to answer the phone
go seeking more
from those who want themselves to stop
If I don't stop soon
I'll spin through the hole
at the bottom of the whirlpool
or crash over the cliff
The wolves are chasing me
I can't stop now
Will I need a pension
or just a box?
How can I dream
if I never sleep?
The lights are on
perpetual amber
I am gonna stop
but not now 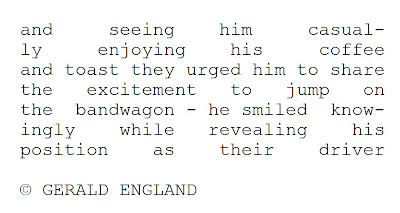 I Have Never Acted my Age

I HAVE NEVER ACTED MY AGE

I have never acted my age;
I was always the young one,
paid half-fare on the buses
nearly three years over the limit.
One summer I served
behind a Highland hotel bar
but back in Glasgow my age
was challenged in an off-licence.

For twenty years
I haven't appeared to age,
still seemed to be
in my late twenties.
A few stray greys
I've noted for some time
but today I saw my face
in a huge, enlarging mirror
that showed the grey hairs
even in my beard
almost out-numbering the dark.

Someone once said
I'd be bald before thirty.
I rightfully scorned them
yet I will be grey
before fifty.

Maybe I will no longer shout
at the children or mutter
at the dog,
nor tear my hair out
when clients cancel
else I'll be bald at eighty.

I cannot count the grey hairs
so will put away
the calculator,
live each day
four and twenty hours,
leave the acting to others.

Posted by Gerald (Ackworth born) at 11:00 No comments: Links to this post

Posted by Gerald (Ackworth born) at 12:00 No comments: Links to this post

Greta Garbo on the Blackpool Bus

GRETA GARBO ON THE BLACKPOOL BUS

Elsie Williamson
met Greta Garbo on a Blackpool bus
going to visit a friend
in Poulton-le-Fylde.

"Ee luv, you do look like her;
I've seen all her films, you know;
I think I must be one of her biggest fans!"

"Have I many fans in Blackpool ?",
biting her lips at the utterance of "I".

"O hundreds, luv, and I reckon on
there must be at least a million
in the whole of Lancashire -
will you come to tea with me tomorrow?"

She scribbled her address
on the back of a brown envelope
that had had her gas-bill in;
"Must dash - this is my stop -
see you tomorrow".

George told her she was daft
but enjoyed the ham and ate the cake.

Two weeks later
a letter arrived
with two complimentary tickets
for the film premiere in London.

Elsie wondered
where she could find
the money for the train-fare.

My Last Poem About Snow

MY LAST POEM ABOUT SNOW

I shan't write again about the snow
telling of icicles and drifts.
I won't again write of how my mother
put me out in my pram
in the deep snows of '47,
the only time, she said, I would sleep.
No more will my pen reveal
the secrets of the snowmen
my brothers built by the railway line
and how the heads melted
when the steam-trains came.
I will not tell again of that December in the 60s
when I walked out of Glasgow in a snow-storm;
a promised lift to Annan at 5am broken,
I thumbed my way South.
In those pre-motorway days the route lay
through the slush-strewn streets of towns -
Hamilton, Lockerbie, Carlisle, Penrith, Kendal,
Settle, Skipton, Ilkley, Otley, Wetherby, Pontefract -
the snow reflecting the civic pride of each
as festive lights brightened the grey day.
Not again shall I write about snow
nor again tell of the return from Liverpool -
when going up Rushup Edge in my old Anglia
I skidded, ending up at 45 degrees
with a dry stone wall an inch away.
It was dark before the grit-wagon came.
They were only going as far as Edale
but towed me out and I returned
to overnight at the Kings Arms in Chapel-en-le-Frith.
The next day I dug out the car
and joined the convoy of lorries
shuffling slowly over Peak Forest toward Chesterfield.
I will not write again about snow
nor tell of the winter of '74
when the world drowned in white,
when the weathermen talked
of temperatures rising towards freezing.
I will not tell of the weeks
when travel virtually ceased
and the drifts blocked
even the entrance to the cemetery.
I will not write again about snow.
Snow is not chaste, unsunn'd
as Shakespeare would have us think.
Snow is not forgetful.
Snow is not a white-wool blanket
Snow is not ice-cream topping for a mountain cone
It does not melt like a retreating army
but swells streams and floods drains.
Snow is simply cold crystals of ice
that fall from a cloud-thick sky.
Eskimos have twenty-seven different words
but there is only one snow
and I shall not write of it again.

Until the winters of yesteryear return
- les neiges d'antan de Villon -,
until the icebergs no longer drift South,
until the earth's warming ceases
I shall not write again of snow.

Me and the other Gerald

ME AND THE OTHER GERALD

Yeah, yeah, I know what I said
I don't write poems about poetry
I don't write long rambling
discourses on all and sundry
but hell when it happened
something had to give or else
or else or else or else or else.
Karl Heiss started it -
sent me a copy of HIPPO
and there I am listed as contributor
but I'm not - Gerald Locklin is
and there are his biog. notes
under my name - it won't do will it?
And the same day
I get sent a review tape from SLIPSTREAM
and it's Locklin rambling on
the way he does about the minutiae of his life
how he fucks his students
and makes poems out of non-events
sure he raises a laugh or two
and some of it isn't that bad at all
Well I stuck the tape in the car-cassette player
and listened to Locklin as I went to work
I stopped at Mrs Jones'
she tells me how her washing-machine
won't do what she wants it to
asks me what my wife would do
I know what my wife would do
but I'm not going to tell that to Mrs Jones.
Back in the car Locklin is laughing at himself
Mr Iqbal wants to find out if the maturity value
of his endowment that comes up next year
will be enough to pay the dowry
for his daughter still back in Pakistan.
Locklin is talking shit about Donald Duck.
Miss Prendergast says she can't pay me this week
the Social haven't sent her her giro
and she's had to buy little Gareth new shoes.
As she bends to pick the baby's dummy off the floor
I'm treated to a clear view of her floppy breasts
and she smiles at me.
Does she want me to screw her in lieu of payment?
Well I've fifty more calls to get through today
Locklin is wondering if he can afford another divorce
He thinks he's living life, hey
Let him try selling insurance in Oldham
The tape ends.
By the time I've finished my round
I've got through two more tapes
but these are "Dolly Parton's Greatest Hits"
and "Brass Band Favourites"!

Posted by Gerald (Ackworth born) at 15:00 No comments: Links to this post

Posted by Gerald (Ackworth born) at 16:00 No comments: Links to this post

they come over
the bridge
from town

she pulls
her warm lined coat
around her
stalks off

the young lad
tags
on to the empty hand.

Posted by Gerald (Ackworth born) at 17:00 No comments: Links to this post

a man sits in a cave knitting

far into the middle of nowhere

shepherds freeze beside their sheep

in the days of the nine suns

there was no resting

in a flight of forward motion

a child is raped by a needle

not walking but measuring

even together you are alone

even together you are alone

Posted by Gerald (Ackworth born) at 18:45 No comments: Links to this post

the simple writing
of seventeen syllables
doth not haiku make

Posted by Gerald (Ackworth born) at 19:00 No comments: Links to this post 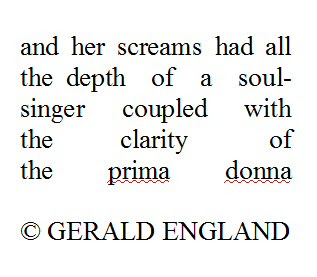 Posted by Gerald (Ackworth born) at 20:00 No comments: Links to this post

Please note that all the work is © Gerald England.

For permission to reprint or use work in any medium please contact me via my website, http://www.geraldengland.co.uk/